First things first: I didn’t get invited to the premiere. I’m not that cool (yet ;p) I just got invited by a friend who got invited, and we both went primarily because we really wanted to see Interstellar. I love sci-fi, and the actors in that movie are all super talented, so seeing the movie early was a treat. Not that the “red carpet premiere” part didn’t sound exciting to me, of course. I’m shallow like that. 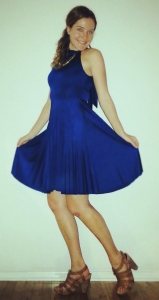 A red carpet premiere means a dress. And that was the first time I realized how this whole struggling artist thing had impacted the small things in my life. Such as my wardrobe. Dress? Only had ones with flower and animal prints from way back when I was young and innocent. Pumps? Didn’t have any. Clutch? Only had one my lil’ sis left behind. First World problems, shall we say?

So my plan was to buy a dress, and return it. That’s how I did it for the wardrobe of my short film If. too. Limited budgets make you creative! But after going to all the outlet stores I actually found a really nice blue dress. Check it out on the right, and guess how much it was?

It was $8. At the Goodwill in Silver Lake. The frugal Dutchie inside me just can’t help but feel joy about that.

Luckily I had a good hair day, because I don’t own a curler, nor a straightening iron. So I threw on the dress, and off we went. In an Uber that is (you know you’re an Angeleno when…) I was planning on riding my bicycle or motorcycle though. The premiere was at the Grauman’s Chinese Theater, which is only a few miles away from my casa. And they always shut down Hollywood Blvd. for these kinds of things, which makes a car not the most efficient form of transportation. But putting being pragmatic before looking glamourous? Silly me…

So here’s what happens at a Hollywood red carpet movie premiere: There’s a little stretch (like 10 meters) of red carpet set up with a backdrop,  and it’s surrounded by metal barricades. The press makes up the first line of defense, and then it’s tons of tourists and other people hoping to catch a glimpse of the stars. It’s really not glamourous. It looks like that on red carpet pictures, but to me it was just kind of silly. Just lots of shouting and people holding smart phones up in the air.

So we’re fighting to make our way through the crowd and then arrive at the security peeps at the barricades. And here’s the cool part: They let us in. I mean, that just feels cool. Like skipping the line at a club or something (which, for the record, has never happened to me). Us normal people weren’t going to do the red carpet of course, so we walked straight to the entrance of the theater, where the “Will Call” is set up. This is a table where you get your tickets to the premiere and after party. And then it’s just a bunch of people in dresses and suits standing around at the Grauman’s entrance, which I pass on a weekly basis, and didn’t look different than usual.

So we go in, and we’re offered some free soda and popcorn. Weird detail: Americans put butter on their popcorn. We settled for water (more on that later) and went to the big auditorium. Which is kinda amazing. It’s a gorgeous gothic slash art nouveau space, with ornate walls and ceilings. But again, it always looks like that. And as a European who’s seen my share of  old churches and art deco, I am quite spoiled. That sounds horrible. But it’s the truth, yo.

Anyway, so there’s assigned seating and people are just nice. It was so low-key. I found myself between some pretty powerful film people, but there was no attitude, no nastiness. Everyone was just there to see a movie, and that’s it. They screen some live footage of the red carpet while you wait, and then the movie starts.

The movie screening itself is just like any other movie screening. Sure, Jessica Chastain, Anne Hathaway and Matthew McConaughy were somewhere in the audience, but I didn’t see them. Probably for the best too, because I would have fangirled all over Jessica.

Interstellar was 3 hours long or so. Back to the “we got water” part: Drinking water before or during this film was not a great idea. Dying of thirst before and during would have been better. The movie deals with special relativity and such, and you’ll really feel like you’ve aged 20 years after watching the whole thing with a full bladder.

I’m not a movie reviewer (aside from to everyone I meet that mentions a movie) so I won’t go into to much detail, but the movie was interesting. Not perfect, but it’s a very cool ride. And I love how they handled things like love and quantum theory at the end. So go see! Just remember to stay absolutely dehydrated to the point where your bladder is a big shrunken raisin.

After party time! This is the glamorous part. You walk up a few sets of stairs somewhere near Hollywood & Orange and enter this big, beautiful ballroom. And everywhere around you there’s free dinner and champagne and coffee and tea and heavenly desserts. I probably gained 10 pounds that night in desserts only. And there’s actual plates and glasses and cutlery! No plastic red cups. I though it was fan-cy. But to be honest, I’m not really used to much. I think everything with free food is fancy. My companion was all “meh.” Guess it’s like me and old arhchitecture. You get used to it. 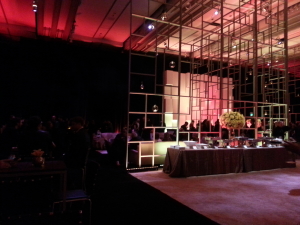 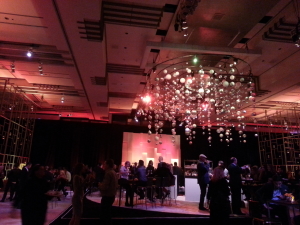 And that was the end of it! My first Hollywood premiere. Did not expect this to become a 1,000 word school report but there you go. It was fun and exciting, but surprisingly low-key. And I liked that.

Viva la living the champagne lifestyle on a lemonade budget! Hopefully next time I’m in the movie, or wrote it…